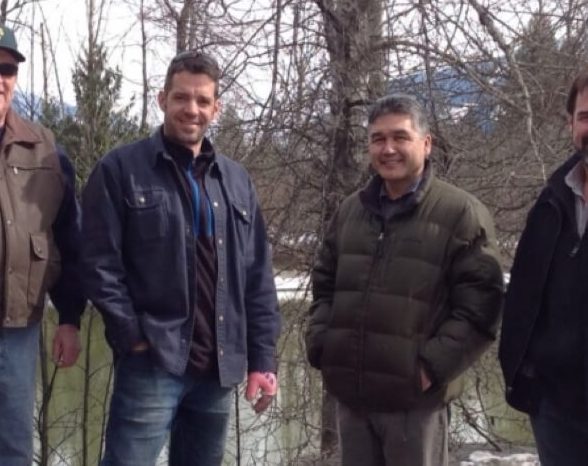 Following the provincial funding announcement on March 21, 2017, the SLRD, Village of Pemberton and Lil’wat Nation are pleased to share the news that the Friendship Trail and Bridge, a vision 13 years in the making, is now fully funded. The Village of Pemberton Council awarded a tender for the bridge construction at their meeting last night, Wednesday 12 April, 2017.

Congratulations and a special note of recognition to Nathalie Klein, Mo Douglas, Jordan Sturdy and Sheldon Tetreault, for creating a vision all those years ago that could align so many people, funding agencies, goals and governments, to create something that will bring our communities closer together.

For Information Boards, a map of the proposed bridge and trail alignment and the project background, visit the Village of Pemberton at http://www.pemberton.ca/public/download/documents/39880

Pemberton, BC/Líl̓wat Territory – The last pieces of funding have fallen into place to realize a decade-long dream of connecting the communities of the Village of Pemberton, Líl’wat Nation and parts of Electoral Area C of the Squamish-Lillooet Regional District (SLRD) via the non-motorized, multi-use Friendship Trail.

The projects are receiving a total of $399,000 from the Government of Canada’s federal Gas Tax Fund. In addition, on March 21, 2017, the Province announced that it would contribute $500,000 from BikeBC to the Village of Pemberton for the Friendship Trail Bridge. This follows Premier Christy Clark’s March 7, 2017 announcement that the BC Rural Dividend would grant $100,000 to the SLRD for the Friendship Trail. These funding contributions will help make the $1.74 million project a reality.

The Friendship Trail was envisioned as a way to enhance both the physical and social connection between the communities of Pemberton and Mount Currie. The trail will allow people to travel by bicycle, horseback or on foot, on a route that will be much safer and more pleasant that the current route used along the highway. The 7.2 km Friendship Trail will also provide a critical link in the larger Sea to Sky Trail project, a trail network undertaken by the SLRD, which, when complete, will be a 180 km multi-use recreation trail linking the Pacific Ocean south of Squamish with the community of D’Arcy on the southern shore of Anderson Lake.

The installation of the bike and equestrian-friendly bridge is anticipated to begin in August to comply with regulations set out by the BC Ministry of Environment to reduce the risk to sensitive fish habitat. The Friendship Trail Bridge will span a length of 117 metres over the Lillooet River, on the south side of the existing highway bridge.

As a result of community consultation undertaken in 2013, it was determined that the highway crossing and North Arm crossing were the most desired locations for the bridge. Costings for both options indicated that the highway crossing was more feasible, being safer, a more direct alignment, and the most cost-efficient; the North Arm option would be approximately $1.2 million more expensive than the Highway Crossing option.

Preparatory work for the trail was conducted after the SLRD Board identified this section of the Sea to Sky Trail as a priority link. Portions of the trail already exist in various stages – SLRD staff is now in the process of determining the final route alignment. Clearing the route and surfacing the trail is expected to begin in the fall.

The partners have been working to secure funding for the project since 2012, with the following commitments being secured:

Project updates will be shared on www.pemberton.ca, www.slrd.bc.ca and www.lilwat.ca as more information becomes available.

“BikeBC funding for the Friendship Trail Bridge project will help the region realize the long-standing goal of connecting Pemberton and Mount Currie through a safe and accessible non-motorized trail that will support active lifestyles, provides alternatives to the car and literally build a bridge between neighbours. It’s partnerships and investments like these that grow community and connect us all with B.C.’s great outdoor lifestyle.”

“We are so thankful to our financial supporters for recognizing the importance of this project, and for closing the final funding gap enabling us to create this significant legacy without using municipal tax dollars. We gratefully acknowledge the financial support of the Government of Canada, Province of British Columbia, Innergex Renewable Energy and the Whistler Blackcomb Foundation, and we thank everyone in the community who has worked hard to support this project to date.”

“The Friendship Trail promises to be an important legacy for the entire Pemberton Valley. Not only will it fill an important gap in our active transportation network, but it’s going to enhance our area’s tourism potential while connecting our residents with healthy lifestyles, the outdoors and with each other. We’re tremendously excited to get started.”

“The Líl̓’wat Nation is pleased to learn that the Friendship Trail will soon be a reality. The completion of the trail will expand both transportation and recreation opportunities for everyone in the region. It will also create greater safety for those travelling by foot, bicycle or horseback. People will no longer have to risk sharing a highway with vehicles travelling 80 km/hr or more. Instead, they’ll enjoy peaceful travel and fantastic views of Líl̓’wat Traditional Territory. We look forward to welcoming future trail users to our territory.”

The original article can be read here: https://www.slrd.bc.ca/inside-slrd/news-events/friendship-trail-and-bridge-now-fully-funded-construction-start-summer